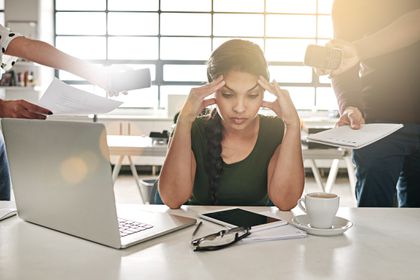 The Toxic Effects of Negative Self-Talk

We all have an inner critic. At times this little voice can actually be helpful and keep us motivated toward goals—like when it reminds us that what we’re about to eat isn’t healthy or what we’re about to do may not be wise. However, this voice can often be more harmful than helpful, particularly when it gets into the realm of excessive negativity. This is known as negative self-talk, and it can really bring us down.

Negative self-talk is something that most of us experience from time to time, and it comes in many forms. It also creates significant stress, not only to us but to those around us if we’re not careful. Here’s what you need to know about negative self-talk and its effects on your body, your mind, your life, and your loved ones.

What Is Negative Self-Talk?

Negative self-talk can take many forms. It can sound grounded (“I’m not good at this, so I should avoid attempting it for my own personal safety,” for example) or it’s downright mean (“I can never do anything right!”). It may seem like a realistic appraisal of a situation (“I got a C on this test. I guess I’m not good at math.”), only to devolve into a fear-based fantasy (“I’ll never be able to go to a good college”).

The musings of your inner critic may sound a lot like a critical parent or friend from your past. It can follow the path of typical cognitive distortions: catastrophizing, blaming, and the like.

Negative self-talk can affect us in some pretty damaging ways. One large-scale study found that rumination and self-blame over negative events were linked to an increased risk of mental health problems.

Focusing on negative thoughts may lead to decreased motivation as well as greater feelings of helplessness. This type of critical inner dialogue has even been linked to depression, so it’s definitely something to fix.

Those who find themselves frequently engaging in negative self-talk tend to be more stressed. This is in large part due to the fact that their reality is altered to create an experience where they don’t have the ability to reach the goals they’ve set for themselves.

For example, one study on athletes compared four different types of self-talk (instructional, motivational, positive, and negative) and found that positive self-talk was the greatest predictor of success.4﻿ People didn’t need to remind themselves how to do something as much as they needed to tell themselves that they are doing something great and that others notice it as well.

How to Minimize Negative Self-Talk

There are many ways to reduce the self-talk in your daily life. Different strategies work better for different people, so try a few on and see which ones are most effective for you.

Learn to notice when you’re being self-critical so you can begin to stop. For example, notice when you say things to yourself that you wouldn’t say to a good friend or a child.

Give Your Inner Critic a Nickname

There was once a “Saturday Night Live” character known as Debbie Downer. She would find the negative in any situation. If your inner critic has this dubious skill as well, you can tell yourself, “Debbie Downer is doing her thing again.”

When you think of your inner critic as a force outside of yourself and even give it a goofy nickname, it’s not only more easy to realize that you don’t have to agree, but it becomes less threatening and more easy to see how ridiculous some of your critical thoughts can be.

If you find yourself engaging in negative self-talk, it helps to contain the damage that a critical inner voice can cause by only allowing it to criticize certain things in your life, or be negative for only an hour in your day. This puts a limit on how much negativity can come from the situation.

When engaging in negative self-talk, you may be able to catch yourself, but it can sometimes be difficult to force yourself to stop a train of thought in its tracks. It’s often far easier to change the intensity of your language. “I can’t stand this” becomes, “This is challenging.” “I hate…” becomes, “I don’t like…” and even, “I don’t prefer…” When your self-talk uses more gentle language, much of its negative power is muted as well.

One of the damaging aspects of negative self-talk is that it often goes unchallenged. After all, if it’s going on in your head, others may not be aware of what you’re saying and thus can’t tell you how wrong you are.

When our inner critic is at its worst, it can sound like our worst enemy. Often we’ll say things to ourselves in our heads that we’d never say to a friend. Why not reverse this and—when you catch yourself speaking negatively in your head—make it a point to imagine yourself saying this to a treasured friend.

If you know you wouldn’t say it this way, think of how you’d share your thoughts with a good friend or what you’d like a good friend to say to you. This is a great way to shift your self-talk in general.

Sometimes looking at things in the long term can help you to realize that you may be placing too great an emphasis on something. For example, you may ask yourself if something you’re upset by will really matter in five years or even one.

Another way to shift perspective is to imagine that you are panning out and looking at your problems from a great distance. Even thinking of the world as a globe and of yourself as a tiny, tiny person on this globe can remind you that most of your worries aren’t as big as they seem. This can often minimize the negativity, fear, and urgency in negative self-talk.

Sometimes when you catch yourself thinking negative thoughts in your mind, simply saying them aloud can help. Telling a trusted friend what you’re thinking about can often lead to a good laugh and shine a light on how ridiculous some of our negative self-talk can be. Other times, it can at least bring support.

Even saying some negative self-talk phrases around under your breath can remind you how unreasonable and unrealistic they sound. This will remind you to give yourself a break.

For some, simply stopping negative thoughts in their tracks can be helpful. This is known as “thought-stopping” and can take the form of snapping a rubber band on your wrist, visualizing a stop sign, or simply changing to another thought when a negative one enters your mind. This can be helpful with repetitive or extremely critical thoughts like, “I’m no good,” or, “I’ll never be able to do this,” for example.

Replace the Bad With Some Good

This is one of the best routes to combating negative self-talk: Replace it with something better. Take a negative thought and change it to something encouraging that’s also accurate.

Repeat until you find yourself needing to do it less and less often. This works well with most bad habits: replacing unhealthy food with healthy food, for example. It’s a great way to develop a more positive way of thinking about yourself and about life.