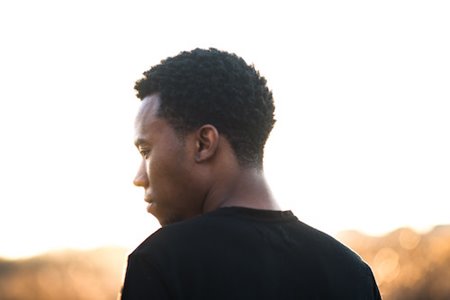 In the black community, there is a negative stigma surrounding mental health. Instead of seeking professional help for conditions such as depression and anxiety, many in the community resort to self-medication (drugs, opioids, alcohol, etc.) or isolation in an attempt to solve their problems on their own. This issue of masking pain is especially prevalent amongst black men.

Speaking from experience, I know how black men grow up in culture that tells us “men are not supposed to cry,” that we “should deal with problems on our own.” This only enforces the idea that it’s not okay for us to say we are hurting inside. I’ve spoken to countless friends who, out of fear of being labeled as weak or less than a man, don’t want to acknowledge or vocalize any of their pains. This is true for me as well, as there have been moments in my life when I was afraid of sharing my true emotional well-being (or lack thereof) to close family and friends.

These are topics I talked about on my show, The Roommates Podcast. Due to my openness talking about mental health challenges, I received countless emails from young adult, black listeners who shared with me their struggles in the darkness. The more I used my platform to discuss topics relating to mental health in our community, the more others felt empowered to speak up and seek help for their own issues. This led to my desire to challenge stigma and bring light to mental health in the black community.

Last May, I wrote and directed “Help,” a film created with the intention of beginning a conversation about mental health in the black community. The film follows the fictional story of a young black man named Raheem, who appears to have it all together on the outside, but has hidden struggles within.

Raheem is a successful man living in the Houston area; he is loved and respected by his community. He has a great career as an oil broker, a supportive wife and a large community of supportive friends. Though when Raheem is alone, you see his struggle with depression.

Raheem struggles to decide whether he should seek help from a mental health professional. When he shares this with his friend Kendrick, he’s told that “black men don’t go to counseling.” This scene is powerful because not only does it reinforce Raheem’s negative perception of getting help, but it also sheds light on the attitude towards mental health in the black community.

While he is by himself, there are thoughts in his head that constantly reinforce everything negative he believes about himself. Yet, whenever someone asks him what is wrong, Raheem says: “Nothing, I’m fine,” and then redirects the conversation with a joke. Sadly, Raheem’s story is reflective of many in the black community—millions of men who are suffering on the inside, but are too afraid to reach out for help.

Lift Up Your Voice

This year alone, there have been over 6.8 million black Americans who had a diagnosable mental illness. If we are unable to remove the negative stigma surrounding mental health in the black community, we are willingly allowing another generation to grow up without access to counseling and mental health improvement resources that can help them live a happy, healthy life.

Out of my desire to create long-lasting change in the black community, I am using my voice and platform to help others. I have heard one story too many of people in the black community struggling in the darkness, and I don’t want that to continue any longer. Anyone, regardless of how strong they are or how much they appear to “have it together” may be struggling with their mental health. You are not alone in your pain and you are not “weak” or “less than” because you are hurting. It’s time we reach out and ask for or offer help—because that’s what it takes to achieve the true healing we need.

Hafeez Baoku is an author, director and host of The Roommates Podcast. His work has been featured on OWN Network, The Houston Chronicle, Fox News 26, Houstonia Magazine, and Houston Style Magazine. You can connect with him at roommateshtx.com